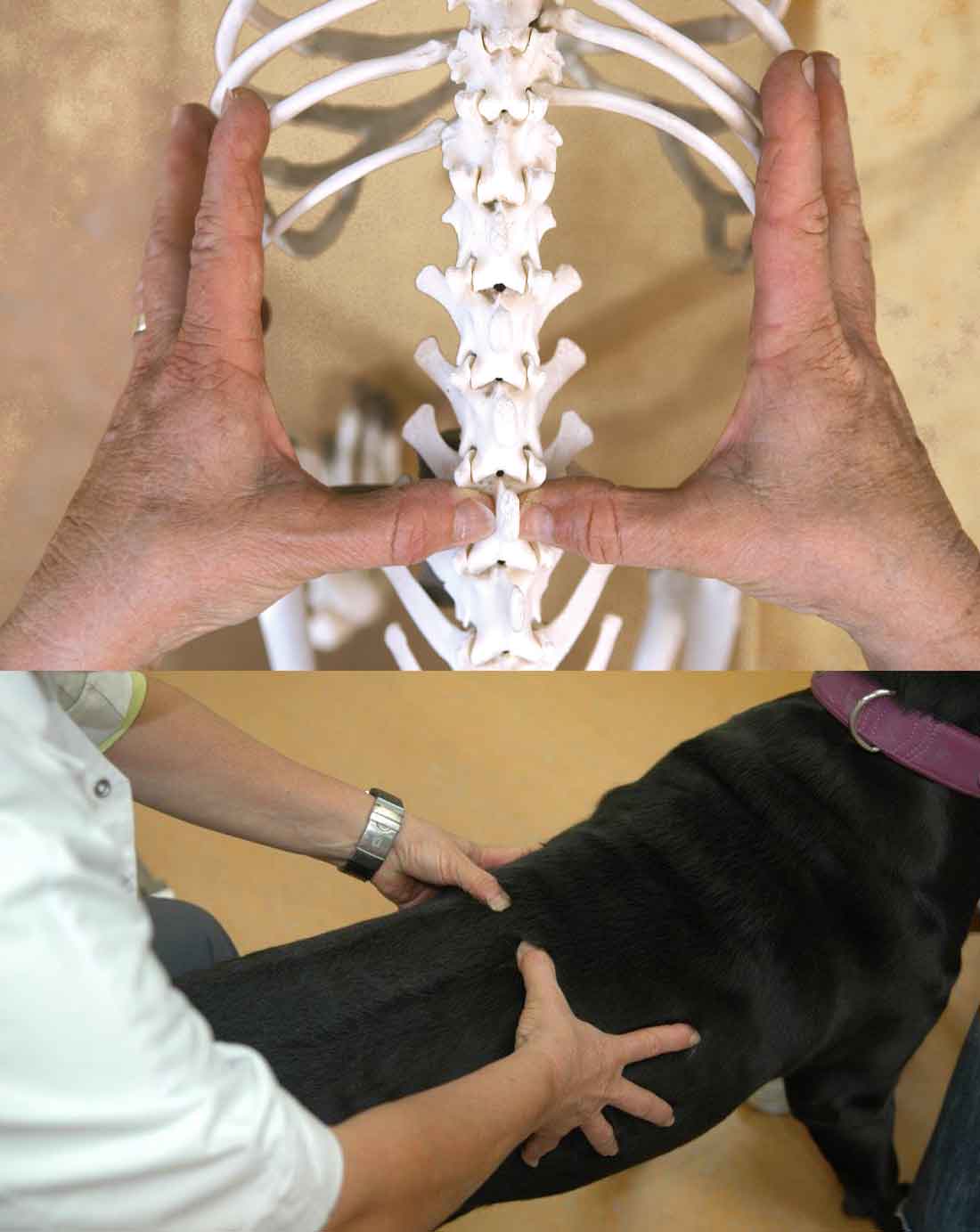 Acute spinal cord injuries related to the intervertebral disc are common in chondrodystrophic dog breeds.1-3 In this Hansen type-1 intervertebral disc disease, chondroid degeneration precedes a protrusion or extrusion of the nucleus pulposus or annulus fibrosis.2,4-6 Extrusion or protrusion can cause compression, contusion and ischemic damage to the spinal cord and nerve roots.2,7 The thoracolumbar region is predisposed to intervertebral disc disease (TLDD).3,6 The clinical manifestation of TLDD depends on the degree of grey and white matter spinal cord compression, caused by primary and secondary trauma. Symptoms vary widely between individuals and may include local pain, paraspinal muscle hypertonicity, and pelvic limb neurological deficits.1,2,8

Treatment options for clinical TLDD are conservative, e.g. cage rest and anti-inflammatory medication; non-surgical, e.g. physiotherapy11,12 and acupuncture13; and surgical.1-3,7,12,14 Manual treatments, such as orthomanual therapy, are regularly used to treat back problems in humans15,16 and veterinary orthomanual therapy (VOT) has also been practiced for several years.17 Orthomanual medicine assumes that intervertebral disc degeneration causes vertebral instability. This instability can induce misalignment of consecutive vertebrae. Vertebral misalignment, instability and intervertebral disc degeneration result in extrusion or protrusion of the nucleus pulposus or annulus fibrosus. Spinal cord compression and trauma due to kinetic energy of the extruded intervertebral disc can cause pain and neurological deficits.16 It is theorised that correcting the misalignment of the vertebrae diminishes pressure on the intervertebral disc and creates an environment that facilitates improvement of the neurological state.17,26,27

An 8 year old male dachshund (12.6 kilograms) was presented at the Practice for Veterinary Orthomanual Medicine (Noorden, the Netherlands) with back pain and pelvic limb paralysis. Symptoms appeared one day earlier and were of acute onset. Prednisolone-sodium succinate (10 mg/kg [4.5 mg/lb], IV/SC) was administered by the referring veterinarian on the day of onset, and cage rest was prescribed. Urinary catheterization was performed to relieve urinary retention. The owner was given instructions to perform urinary catheterization four times a day at home. Two years earlier, the dog had fully recovered from an acute spinal problem with pelvic limb paralysis grade IV after receiving orthomanual treatment.

The dog was presented with posterior paralysis. No abnormalities were noted on the general physical exam. The muscle volume and tone of all limbs were normal. Spinal reflexes, superficial and deep pain perceptions in all four limbs and the perineal reflex were intact. Proprioceptive positioning (knuckling) was absent in both pelvic limbs.19 The bladder was of normal size and not easily evacuated by manual abdominal pressure. Summarized findings on the neurological examination were: symmetrically absent proprioception of the pelvic limbs and intact spinal reflexes of all limbs. Therefore, the lesion must be located between Th3 and L3, and classifies as grade IV because of the absent bladder control.17

The orthomanual examination is performed on the dog standing squarely in front of the veterinarian. The dog's body is supported by an assistant, using both hands. The vertebral column is palpated from tail to head by placing the thumbs on either side of the vertebral dorsal spinous process. Vertebral misalignment is detected by visual inspection of the position of the thumbs and by palpation. Asymmetry, local pain and paraspinal muscle tone, as well as muscle atrophy are noted. A misaligned vertebral position is corrected by slightly elevating the vertebral body with the thumb and then imparting an impulse to the spinous process with the thumb, thereby pushing it into the correct position.17 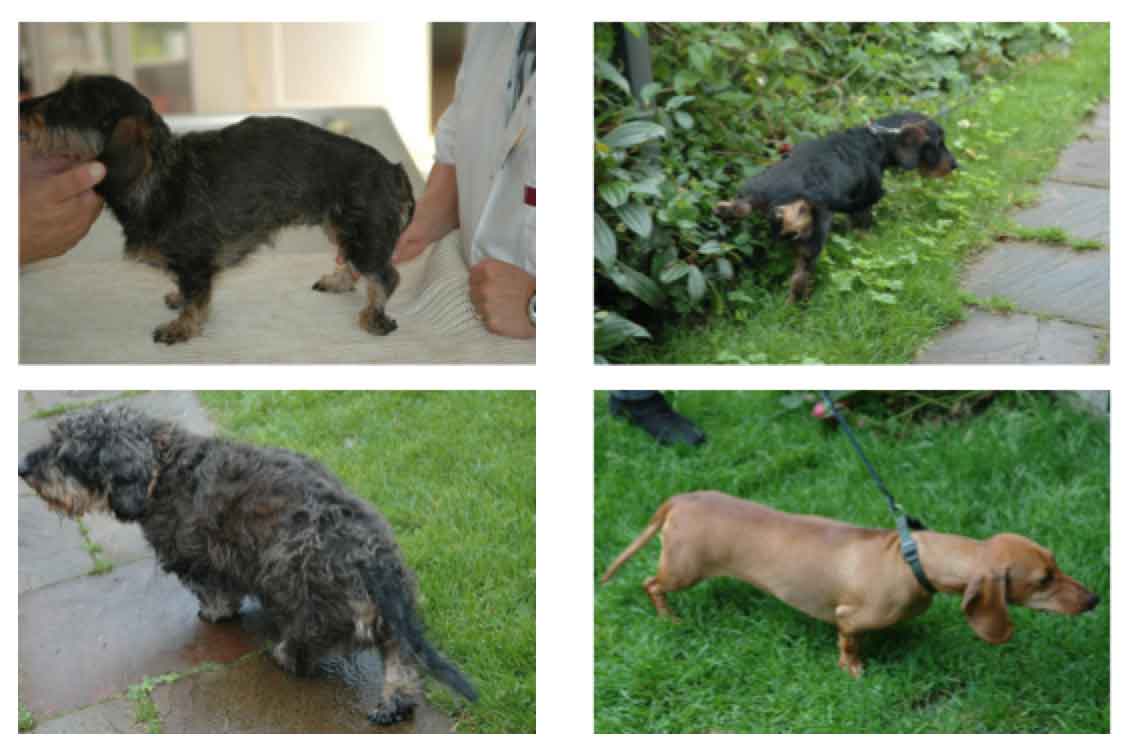 At the two week follow-up, the dog was ambulatory with posterior paresis. Proprioception was intact in the right hind leg, and impaired in the left pelvic limb. The dog was pain-free and had regained full bladder control. At the six week follow-up, the dog's gait was completely normal and proprioception was intact in both pelvic limbs (neurological grade 0)17. The orthomanual treatment was therefore considered successful and completed.

The diagnosis of TLDD is often based on the patient's signalement and history, symptoms, and findings on the physical examination. Considering the neuroanatomical localization and the acute onset in this patient, TLDD is the most probable diagnosis.7

It is assumed that intravenous administration of a high dose (30 mg/kg) of prednisolone sodium succinate within 8 hours after the onset of TLDD signs can minimize spinal cord damage by deactivation of free radicals. However, its efficacy has never been demonstrated in dogs, and the risk of side effects is relatively high.2,11

The conventional treatment of grade IV TLDD is surgical. Surgery aims to decompress the spinal cord and remove the extruded intervertebral disc material. Efficacy studies of TLDD treatment methods define and categorize the clinical effects differently.3 To summarize, most studies refer to clinical, rather than neurological recovery. In these cases, the criteria for a successful treatment are: 1) unassisted walking, and 2) improvement of the neurological state. Residual pain or paresis are not taken into account. Thus, with regard to the neurological state, patients with residual grade II and grade III neurological deficits are generally considered as successfully treated.2,11,24,35,36 Review of literature reveals a 46-100% success rate for surgical treatment2,3,5,6,14,24,32 , and a 50-54% success rate for conservative treatment10,11 of grade IV TLDD.

Differentiation between assisted and unassisted walking patients reflects the assessment of the animal's quality of life as it is made by the owner, and is appropriate for that purpose. However, lack of uniformity in the evaluation of TLDD treatment efficacy makes comparison of studies difficult. In Aharon and Buntsma's study, a successful treatment is defined as recovery to neurological grade 0, which means lack of residual pain or paresis. The success rate of VOT in dogs with TLDD grade IV, according to these standards, was 48%. Furthermore, the condition of 43% of dogs improved, going from grade IV to grade I (ambulatory, pain-free, with intact, delayed proprioception, or with some residual motor deficiency).